There are over 300 hundred different species, or types of hummingbirds! Let's discuss some of the most common ones you're most likely to come across. 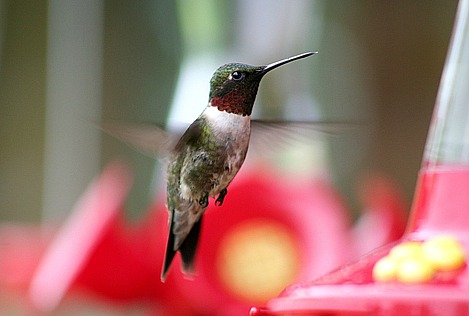 The most common species in the United States.

The Ruby-throated hummer is a very inquisitive bird, easy to attract with feeders and aggressively territorial.

It may hang around a feeder for awhile guarding its food source from other birds and insects.

This bird loves red clothing and flowers and will get very close to inspect.

Depending on food availability it'll take anywhere from 14 to 31 days to hatch her young; 18 to 23 days is average.

The Ruby-throat can live as long as 12 years, but three to five is normal. 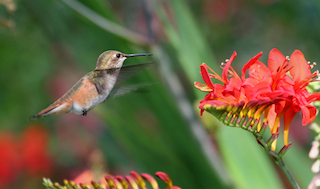 This little guy out-flies all others! It has the longest migration route of all US types of hummingbirds.  He's found in all states except Hawaii.

His 3.2 to 3.4 grams of weight makes him the ideal size and weight ratio for hummingbirds.

Named for the rusty red color of his crown, tail, sides and back, the Rufous has a bright red-orange gorget (throat) and white breast.

It looks very similar to the Allen’s Hummingbird and it's hard to tell them apart unless one is very savvy about hummingbirds. 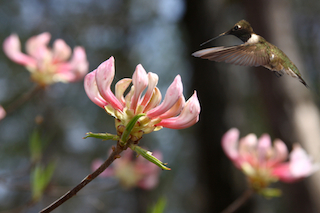 The  least colorful of all the species.  It's a medium green with black gorget. The only speck of bright color is a tiny band of purple on the throat. The Black-Chinned is found in about 25% of the United States. 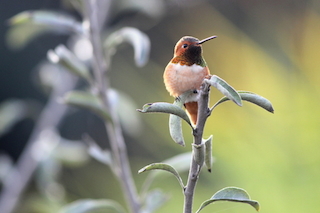 Allen’s are mostly a metallic bronze-green with iridescent coppery color. They do have a bright red gorget.

They mostly like the coastal areas of California but have made migrations to the southern states of Georgia and Louisiana. They've also been sighted in some eastern and mid-western states.  Some Allen’s stay year round in California and don't migrate. 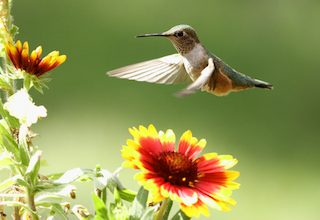 The Broad-tailed hummer has a cricket-like sound when its wings flutter.  A female Broad-tailed holds the record for the oldest hummingbird on record: 12 years old.  This bird winters in Mexico then migrates to some northern, mid-western and southern states of the US. 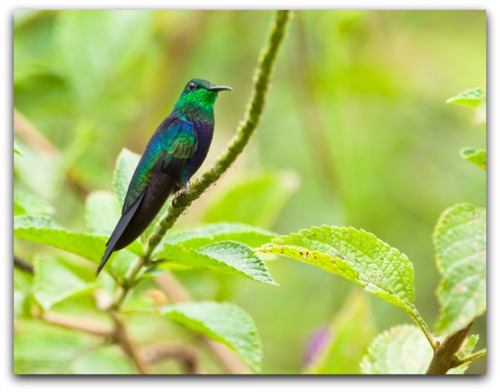 One of the types of hummingbirds that's native to South America. The male has a beautiful glittering violet under-belly with a throat lined in sparkling green. It likes to breed in forests, as well as semi-open areas such as a plantation or garden. 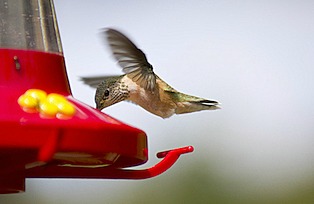 These are the two tiniest types of hummingbirds.  The Bumblebee Hummingbird is so tiny it's usually mistaken for an insect.

It's native to Mexico and doesn’t migrate much. One sighting was seen in nearby Arizona in the 1990s.  2.75 inches long, it's green and white with a violet red gorget.

In Mexico they call the bird Zunzuncito meaning “little buzz buzz”. It has the title of the smallest bird in the world.

The Caliope Hummingbird is just a tad larger. It has the honor of being the smallest breeding bird in North America as well as the smallest long-distance avian migrant in the world.

The Caliope is found in Washington, Oregon, Nevada, California, Wyoming, Colorado and Utah and as high as 11,000 feet in the mountains. It's metallic green with white throat feathers that have long purple red streaks of color (what look like whiskers if fluffed out). 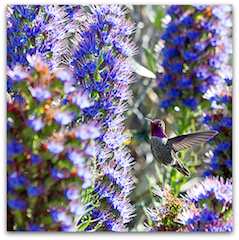 Anna’s Hummingbird is the most common one in Southern California.

Along with Costa’s and Allen's is part of the trio of hummingbirds that are permanent year-round residents of the US, mostly in coastal California, but also in Oregon and Washington.

Anna’s is metallic green with a dark rose colored crown and red gorget. 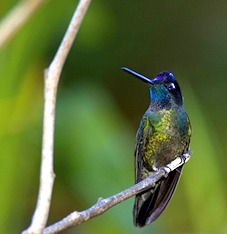 This hummingbird is magnificent in color and is the second largest, from 6.4 to 7.7 grams in size.  Dark green plumage with a purple forehead and crown. He has a black breast and metallic green gorget.

He's found in the southwestern states of Arizona, New Mexico, Texas, and Nevada as well as Alabama and Georgia. Also as far north as Minnesota and Wyoming. 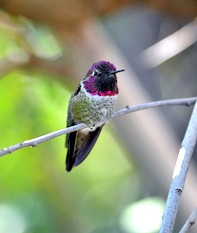 Another permanent resident of the US, he has a green back with gray crown and brilliant purple throat.  Costa’s love Joshua Trees and Cholla Cacti so are found in the southwestern states of the US like California, Nevada and Utah. 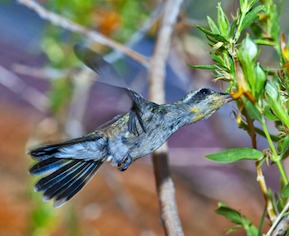 Sometimes the Blue-throated Hummingbird gets as big as 8.4 grams making it the largest of the species.  This beauty winters in Mexico and makes the short migration to coastal California and Louisiana, and other states of the US in the spring. It's found in Arizona, California, Colorado, Louisiana, New Mexico, Texas and Utah. 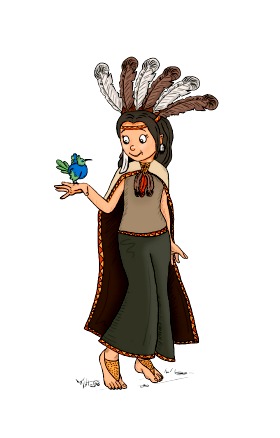