Hummingbird Predators And Dangers - Not Just The Praying Mantis! 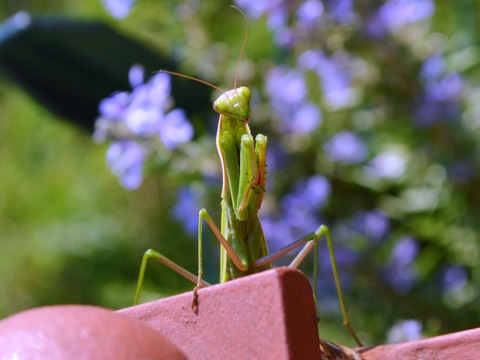 They Can Hold Their Own!

Since hummingbirds are extremely fast, very agile and pretty aggressive themselves by nature, there are not many predators than can catch them in one to one combat.

However, when the hummer is busy feeding, migrating, building and tending a nest, and his attentions are diverted, there are some devious and skillful predators and unforeseen dangers.

The biggest enemy and hummingbird danger are humans.

By erecting buildings, towers and other construction in the migratory paths of hummingbirds, human beings have created extremely dangerous situations.

The use of nearly invisible glass in patio doors and windows have killed many an unwary hummer and open garage doors have become death traps to some.

Our vehicles and ATVs have killed tens of thousands of hummingbirds in unfortunate accidents. Use of pesticides, herbicides and insecticides have also proven harmful and reduced the populations of these tiny birds.

Unfortunately, poaching of illegal colorful tropical birds has also made an impact on our hummingbirds in the tropics, but organizations like the Washington Convention on International Trade in Endangered Species (CITES) is strictly regulating trade only to dedicated bird-keepers for captive breeding purposes.

These bird-keepers may actually provide useful information for saving endangered species in the future.

Beyond the human dangers, nature has provided a food chain that includes hummingbird predators and dangers.

Hummingbirds have been captured and killed by feral cats, small animals, larger birds, reptiles and large fish and even insects.

To protect themselves from predators, the hummingbird will camouflage its nests in very high locations and on tiny thin branches that will not support the weight of animals like squirrels, cats and chipmunks.

Their eggs, however are vulnerable to bats, large birds like jays, crows, ravens, grackles, flycatchers and orioles as well as large snakes, lizards, hawks and shrikes. Owls have been known to kill hummingbirds that are in their torpor states of diminished energy. Ants can also invade hummingbird nest and actually kill the young birds.

To be fair to larger birds like the Loggerhead Shrike, the Sharp-Shinned Hawk and the American Kestral, they most often mistake the tiny hummer for insects. Not so for devious insects like the Orb-weaver Spider, the Praying Mantis, large dragonflies and robber flies; they trap the hummingbird in a variety of ingenious ways.

Large robber flies, sometimes called “Bee Panthers” or “Beelzebub Bee Eaters” are the largest flies in North America. They masquerade themselves as bumblebees to get close to their prey, then kill or paralyze with lances under their chins. These lances inject enzymes that start the demise of their prey as they suck out fluids.

Orb-weaver spiders “snare” the unsuspecting hummingbird in almost invisible webs where they proceed to destroy their captive prey. The webbing used in this instance was the very source for creating a safe webbing used by bird-keepers and conservationists who capture, tag and release hummingbirds for tracking.

If hummers are lucky enough to be spotted by someone when trapped in a spider's web who can release them, they are not harmed at all.

One of the most amazing hummingbird predators and dangers which sometimes causes distress to bird-lovers is the praying mantis.

The praying mantis is beloved by gardeners, farmers and home-owners because it dines on a diet of unsavory garden pests like mites, aphids, moths and flies. However, the praying mantis seems to also take pleasure in capturing and eating anything it can before it gets them. This includes reptiles, small rodents and birds like the unsuspecting hummer.

Praying mantises can camouflage themselves as harmless sticks, pieces of wood, bark or even flowers until their prey is within striking distance. Once its spiked forelegs have a grasp on their target, they slice it up and chew it alive.

Partial list of most common hummingbird predators and dangers