Hummingbird Facts:
Their Significance in the Ecological System 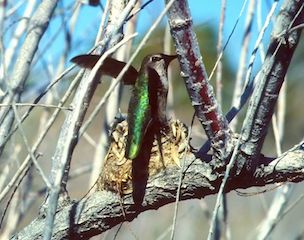 Let's discuss important hummingbird facts. In the world's ecosystem of all living things, reproduction is the only way to sustain life.

In the world of flora and fauna, living under nature's "rules of the jungle" (so to speak), there are predators and prey, and there are symbiotic relationships.

Symbiosis is the condition when two dissimiliar organisms live together in beneficial associations called mutualism.  Some symbiotic relationships in nature include: oxpeckers and rhinos; sharks and remora; fig trees and amazon fruit bats; squirrels and trees; coyotes and badgers; Andean swordbill and passion flower. Hummingbirds and nectar-producing flowers are another example of symbiosis.

Hummingbirds are important to the ecological system because they are such a unique bird.  Three quarters of the world's flowers depend on insects, birds and bats for pollination; of the 200 species of nectar-producing plants in North America, 150 of those depend on the hummers for seed dissemination, dispersal of pollen and regeneration.

If plants do not pollinate, fertilize and reproduce, they will die. Therefore, can we deduce that if not for the hummingbird, some species of nectar-producing flowers would die and become extinct?  Probably.

To encourage the mutualism between many plants and hummingbirds, nature has added a few tricks.  Since hummingbirds can not smell, but have exceptional vision, most nectar-producing flowers have the following characteristics:

One of the more interesting hummingbird facts involves the "birds and bees" reproductive cycle; bees can NOT see red!

Some pollination in nature is accomplished by the wind, but mostly survival of plants depends on the birds and bees. The high energy hummingbirds are crucial pollen carriers to the tall treetop blossoms of rainforests and other tall trees.

These little birds can visit and feed upon between 1,000 and 3,000 flowers a day; in human terms this is equivilent to eating over 350 of potatoes!

Hummingbirds need these nectar-producing plants as much as the plants need them.  In fact, they need them all along their very long migratory routes and disturbances to their habitats is dangerous to the ecosystem. Disturbances of habitats can lead to misdirected migratory routes, which in turn could cause a decline in hummingbird population, and quite possibly the plants that depend on them.

Dangers to the habitats of hummingbirds along their migratory routes include:

Many of the hummingbirds habitats are very close to the equator.  Some countries of South America, whose diverse ecological zones attract over 300 species of hummingbirds, are suffering from pollutions and mangrove cuttings that put some species in danger.

It is believed that at least 34 varieties of hummingbirds or nearly 10% may be threatened with extinction if habitats are not regenerated.

There are four classifications applied to the dangers to the bird populations, including hummingbirds:

Due to construction, pollutions and disturbances during the 1970s for a couple decades, hummingbird habitats have been lost or on the decline in most of these countries:  Columbia, Mexico, Honduras, Chile, Ecuador, Costa Rica, Peru, Venezuela, Brazil and Panama.

An example of an endangered hummingbird:  the Sapphire-bellied hummingbird local to Columbia.  There is believed to be only between 50 and 249 birds alive at this moment.

If our ecological system is not brought back into balance and destruction to wetlands, mangroves and other hummingbird habitats not stopped, this beautiful little jewel of a bird will be lost.

Some ornithophilous blooms and flowers that enjoy mutualism with hummingbirds for survival are: